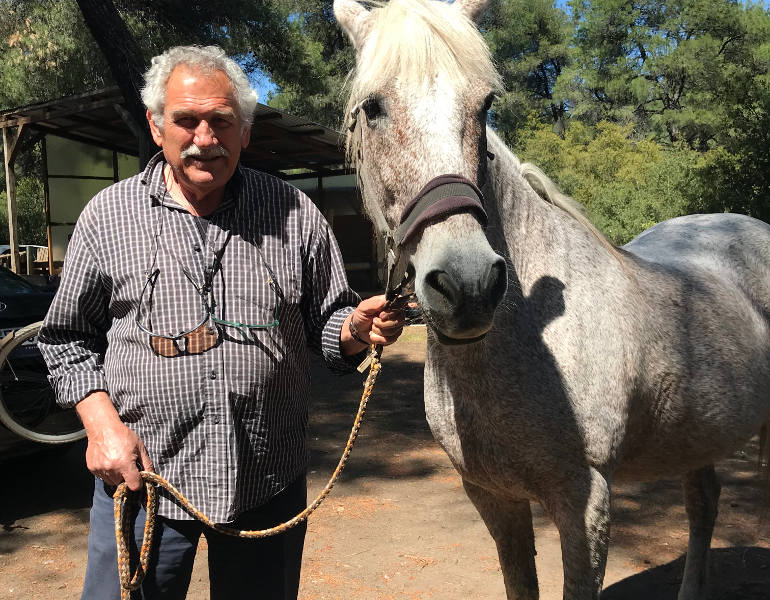 Northern Evia is a small paradise with waterfalls, pilgrimages, museums, splendid mountain slopes as well as seaside paths and beaches. All that fits into a travel program. Agia Anna Beach, built along the longest beach of Evia (about 9 km) is named Agali from the word ‘agalia’ which means hug because it’s like hugging the sea, is an ideal destination as it combines sea and mountain in equal doses.

Rancheros sanctuary is located in a pine-tree area of 17 acres in the forest where seven horses and two donkeys live in a state of liberty with the company of 5 dogs, 1 cat (all of them former strays), 1 rooster and 3 chickens. Five years ago, they were facing serious health problems and malnutrition. . . Now, under the care of Rancheros Rancheros, all equids are healthy, absolutely friendly and calm.

At Rancheros, we will first learn the stories of these equids, and then take care of them. We brush, clean and, of course, caress them. It sounds simple but it is the basic rule in pet therapy.

Pet Therapy, that is, animal therapy, is widespread in foreign countries, and in recent years its’ presence has been very strong in our country too. The philosophy is based primarily on the emotional bond that develops between humans (and other) animals.

All age groups , can join Pet Therapy programs. Especially for the elderly, there are many researches showing that pet therapy helps significantly people who suffer from dementia (Alzheimer’s etc.), but also this kind of therapy helps people with chronic conditions, mobility issues, depression, stress disorders, or heart disease.

However, one does not have to suffer from anything to experience the beneficial effect of a session. And it is obvious that Rancheros animals have excellent veterinary care.

An equally widespread method is equine-assisted therapy which is the one during which one treats the horse (feeding it, caressing it, brushing it, etc.) in order to achieve psychological benefits.
On the other hand, there is therapeutic Riding, during which the participant improves their muscular strength, balance, and attitude of their body. Whoever among the participants of your group wishes to ride a horse, that is possible, as Rancheros has the necessary equipment for both the horse and the rider.

Cost:120 euros (group price, not including walk or ride with a horse)

*These activities can take place in May, June and September.

On the way to Aghia Anna, at the village of Prokopi, you can visit the monastery of St.John the Russian. A big number of pilgrims are visiting it daily.

There is no ATM neither at the beach nor at the village of Agia Anna. The closest ATM is in Mantoudi (15k distance)

A Gas Station and 2 pharmacies are at the village of Agia Anna, not at the beach. The distance from the beach to the village is about 10 mins by car.
Finally, at Agia Anna beach there is a great brewery, Vynilio, where you can enjoy some rock music. They often organize DJ nights and live music concerts.

In Chalkida follow the signs “North Evia”. 5km after, pass by N.Artaki and go towards Psachna. After 5km you arrive at a traffic light where you should take the left side towards St.John’s the Russian’s monastery. You then enter the area called Castella and you arrive at one more traffic light after which you keep going straight following again the sign “L.Edipsou-St.John’s the Russian”. You then drive over a mountain called “Aghios” for about 30km before passing by the village of Prokopi where you should follow the sign “Mantoudi, L. Edipsou”.

8 km later you go left at Mantoudi where a gas station is on your right (do not enter Mantoudi village instead) following a sign “Limni-Edipsos-Istiea”. In about 6km later you will see the junction which takes you to Limni if you go left, but you keep driving straight and in about 12,5km you will turn right where the sign “Towards Agia Anna beach” is (be careful because the sign is small). After 4 km you arrive at the beach of Aghia Anna, known also as Agali beach where you turn on your right at the road before the last one, a drive of 3km more will take you to Rancheros sanctuary which is right after the famous camping Agia Anna club.
From Chalkida you should estimate a travel time of about 1 hour and 15 minutes for a 70 km distance.